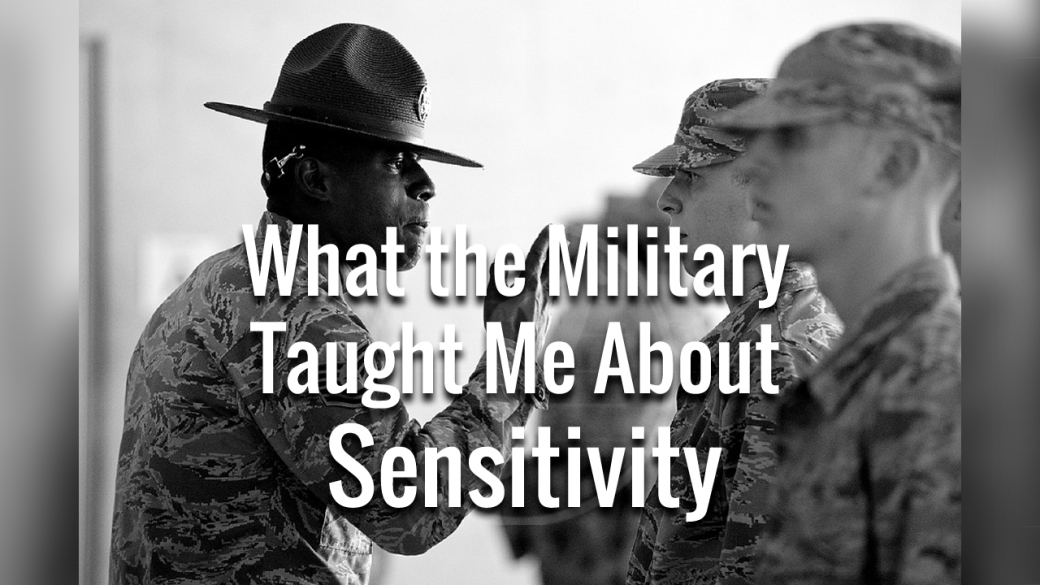 There are many career fields where people believe that tough skin is a prerequisite for employment. I can think of a few off the top of my head: police officer, fireman, designer, school teacher (kids can be evil). In my opinion, there are a limited selection of careers that can compare to life in the military. To most people, the military can seem like it is definitely not a place thriving with sensitivity…

Let’s be clear, I’m not bashing the military in any way, I actually enjoy serving my country. What I enjoy more, is the opportunities I have had to learn more about myself and how other people work. One thing I have definitely learned is that:

I work with people on all ends of the sensitivity spectrum. On one end are the people who can’t even be swayed by harsh words or criticism. On the complete opposite end are the folks who fall apart at the seams if they even think that someone doesn’t like them or their work.

Listen, in my opinion, if you want to be successful in any work environment, you’re going to deal with criticism. How you handle that criticism will determine what you do going forward.

Criticism is GOING to happen.

When I was in college studying architecture, I thought that I was developing a tolerance for criticism. Every time that our studio classes completed projects, we would line them up in the hallway for review. One by one, each student would stand beside their project, in front of the entire class and a panel of instructors (not just instructors but working architects) to present their work. These were the make or break moments during my college career, because no matter how confident you may be, there was always the chance that something was wrong with your work.

And there usually was..

These “presentations” were never actually called presentations. No way, they were called critiques, because that’s exactly what happened. You received a healthy portion of criticism in reference to something that you made.

This taught me two things:

1. You’re not going to be right all the time.

The military is no exception to this, but on an entirely different level. From day one, when you step off the bus at Basic Military Training you learn that nothing you do is ever “good enough”.

Your uniform is wrinkled, this floor isn’t clean enough, you’re running too slow, that was a dumb answer, do more push-ups, etc. etc. It’s unnerving at first, until you realize that the reason these men (or women) in the awesome hats are constantly screaming at you is to prepare you for your career to come. We are expected to be able to operate under intense pressure, so from day one we’re trained to do everything with extreme detail.

It seemed like the lesson they were trying to teach us was, “You can’t do anything right, so you should just try harder”. The point of this was to make sure that when we left, we’d at least do most things right. I didn’t understand it while I was there, but I can see the point of it all now.

It is a lofty idea to think that you have all of the answers, but it’s honestly okay if you don’t. It’s easy to get caught up in trying to prove how competently you can do your job, but if you find yourself in a situation where someone points out a way that you can improve what you’re doing, just take it for what it’s worth, learn from the suggestions and move forward.

Some people aren’t able to accept criticism at all and they usually break under pressure. They allow their sensitivity and their concerns with what other people think to stifle their growth. Through architecture and the military, I have learned that real criticism should facilitate growth, not hinder it. It can be difficult, but you have to get to a place where you can handle criticism without taking it to heart and feeling like everything is a personal attack. Effective criticism should highlight areas that you still need to work on and give you a direction to travel in.

It should not keep you from progressing. You have to fight the urge to quit every time that you’re met with a little resistance.

Inevitably, there will be times where people won’t like your ideas or the way that you’ve done your job. When this happens, I would suggest asking for feedback. Take the opportunity to see if they have any ideas for how you can do better the next time.

Or take the opportunity to find out if they’re just a bitter person with nothing better to do than hate on your hard work.

Either way, you should always try to learn something from criticism instead of being sensitive about it.

But hey, that’s just my opinion – take it for what it’s worth.

What are some examples of criticisms that you have experienced in your workplace or school environment? Do you think you were pretty sensitive or did you handle it well and learn from the experience? Let me know in the comments below!

One thought on “What the Military Taught Me About Sensitivity”